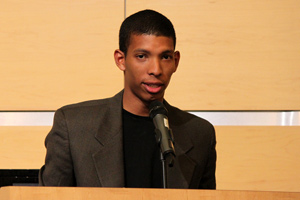 Everson Taveras of Haverhill, NECC journalism student, Army reservist, Parnassus staff member, and published writer in the next issue shared a couple of his five poems that will be published in the upcoming issue of Parnassus

The 2012 issue of Parnassus will be published in early June.

In 2011 Parnassus Magazine was named the top two-year magazine of its kind in the country by the Associated Collegiate Press. The magazine also won first place in the eastern division of the Community College Humanities Association awards, and the prestigious Gold Crown Award from the Columbia Scholastic Press Association, which put the magazine in the top six in the nation of all colleges, not just two year.

“Last year we had Steven King as our guest author which was a huge, huge gift,” said Lochelt. “This year we did as well with Gregory Maguire.”

McGuire is most famous for his Wicked series of books, which are prequels to The Wizard of Oz told from various character’s point of view such as the Wicked Witch of the West. He may also be better identified with the musical Broadway adaptation which is currently touring the globe. “He gave us a brand new never before published story for Parnassus,” said Lochelt.

He also announced that in celebration of NECC’s 50th anniversary of the college he contacted Tom Sexton, an NECC graduate who founded Parnassus in 1965. Sexton is a professor emeritus of the University of Alaska, a celebrated poet with 12 books, and the former Alaskan Poet Laureate. “He is an amazing writer. He actually gave us more recent work which is going to be in our new issue as well.” Sexton will be visiting the college for a poetry reading in the fall. 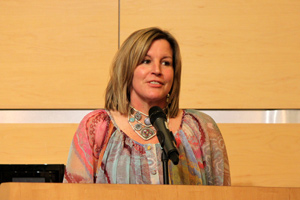 Kassie Rubico an NECC faculty member and published writer in the upcoming issue, was the first up to read some of her work

Playing Jazz, chord melodies, and other music during the evening was Eric Giribaldi of Bradford an NECC music studies alumnus currently studying for his bachelor’s at UMass Lowell.

Guests of the release party enjoyed a sneak preview of the 2012 issue, which will be published in June, in addition to the music, food, and some great stories and poems.