Lay Off Leads to Rewarding Career in Respiratory Care 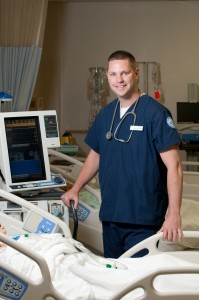 Jeff Tibbetts had a college degree and a decade of experience working for several top financial institutions, but he didn’t have personal satisfaction until he enrolled in Northern Essex’s respiratory care program.

This was Jeff’s second experience with NECC. Back in 1997, after graduating from Sanborn Regional High School, he earned an associate degree in accounting. He even played on the NECC basketball team. Jeff transferred to Southern New Hampshire University and earned a bachelor’s in business management. For over 10 years, he admits, he was content earning a good living working for some of the best names in the industry.

“I had a job, but I never felt satisfied,” the Newton, NH, resident says.
All that changed nearly two years ago when he was laid off. “I decided then it was time to move on,” he says. “I no longer wanted a desk job.”

The layoff coincided with his father’s decline from Chronic Obstructive Pulmonary Disorder. Jeff accompanied his father on his numerous appointments and found himself entrenched in and inspired by the medical professionals who cared for his dad.

“I realized respiratory care offered everything I wanted,” says the 33-year-old.
“Respiratory therapists really make a difference in people’s lives. They help people feel better. They provide an impressive amount of health care. They are also on the first line of defense in the emergency room. And, there are job opportunities.”

Jeff also liked that after completing two semesters in the respiratory care program, students can work in the field under a student license.

His decision made, Jeff turned to NECC where he says he had a “great experience” the first time he attended.

Motivated but rusty, Jeff wasted no time familiarizing himself with the NECC
Academic Resource and Tutoring Center where he says, “I relearned how to study.”