Over 1,000 Graduate from Northern Essex 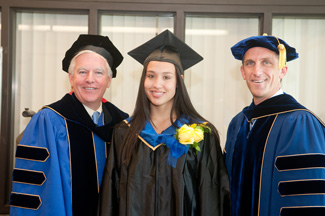 “I have to tell you…you graduates have gotten a better education here at Northern Essex than most of those who have graduated other places,” UMass Chancellor Marty Meehan told the NECC graduates and their families and friends seated under a white tent on the quad on the Haverhill campus during Saturday’s 50th commencement ceremony.

“…and that is because not only have you learned the subjects and taken and passed all of the required courses to earn your degree today, but you have learned how to be a great human beings,” he continued.
Meehan noted that most of the graduates have, overcome adversity and obstacles, helped each other, become the first in their family to receive a college education, emigrated from other countries, married, and raised families. “…but all of your collective experiences have made you stronger,” he told them.

He pointed out Herinell Linares of Lawrence who recently received the honor of being named to the Massachusetts Department of Higher Education’s “29 Who Shine” an award recognizing students of the state’s public colleges and universities for great achievements and academics. Linares earned this award because of success despite the fact he arrived in the United States just six years ago unable to speak English. He completed the ESL program before moving on to college level classes all the while holding down two jobs. 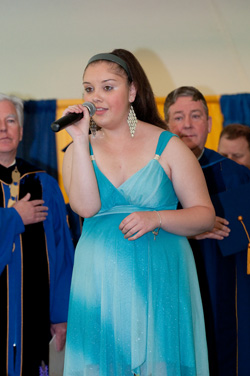 Meehan said he personally believes individuals need five qualities to be successful – be a good listener, commit yourself to lifelong learning, never compromise your name or integrity, recognize that money will never make you happy, and always remember where you came from.

Meehan’s remarks followed student speaker Cecilly Deorocki’s of Merrimac who was recommended for student commencement speaker by three of her NECC professors. Deoricki graduated with a 3.98 GPA. She earned her associate degree in liberal arts with a psychology option and will attend Sarah Lawrence College in the fall where she will study political science/legal studies and philosophy.

Deorocki shared with the crowd of 3,000 that she had struggled with depression and an eating disorder. “The funny thing about depression though, is that your idea of happiness becomes wildly distorted and although I hate to spoil the ending, my life became exponentially better once I began my first semester here.”

Because of the kind and empathetic faculty, Deorocki says, she gained wisdom, confidence, and academic success. “I was given the ability to realize my dream (of attending Sarah Lawrence) by attending Northern Essex. That really is a remarkable moment.”

The commencement proceedings opened with the National anthem sung by NECC student Amanda McCarthy of Londonerry, NH, a general studies with a music option major.

NECC President Lane Glenn presided over the ceremony for the first time since becoming president last July. He noted that the college has come a long way since it opened its doors 50 years ago with 181 students and six college majors. Today there are 7400 students and more than 70 majors.

While the college has undergone many changes there has been one constant – the faculty has always been outstanding. He pointed to graduate Pat Lundin of Merrimac who supported this comment. She was graduating with high honors with a degree in general studies after taking classes over a 45-year period.
“Pat readily admits that she would have given up long ago without the support of her professors and she marvels at Northern Essex’s “knack for finding good people.”

Jason Bohanan of Haverhill, president of the NECC Student Senate, who graduated with honors with a degree in business transfer presented the class gift of electronic communication boards. 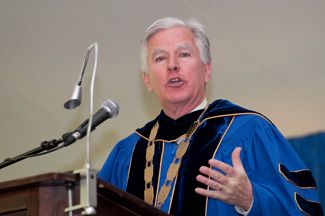 Attorney Dawne Young, a 1992 graduate of NECC and chair of the NECC Alumni Association, presented the Outstanding Alumni Award to William and Rosemary Klueber of Bradford.