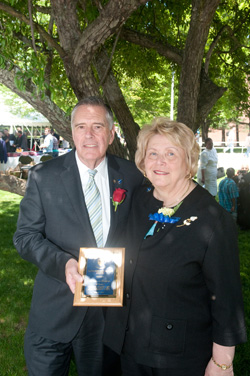 Bradford residents and Northern Essex Community College alumni William and Rosemary Klueber were awarded the NECC 2012 Outstanding Alumni Award during the college’s recent 50th commencement ceremony on the Haverhill campus. William is the retired auditor for the city of Haverhill. Rosemary is a retired nurse.

The award is given annually to recognize an NECC graduate who has achieved success in his or her career, is active in the community, and has given back to the college in some way.

Rosemary was a member of Northern Essex’s first nursing class and graduated with her nursing degree in 1970. She also holds a degree in human services and administration from Merrimack College. She spent her career at the Hale Hospital (now Merrimack Valley Hospital) and served as a nurse manager. Rosemary managed the operating, recovery, and surgical daycare units and was responsible for a team who set up the hospital’s computer system. Since retiring, she has served on the board of directors for the YWCA, is presently the vice chair of the St. James parish council, and a member of the Haverhill Garden Club.

As a duo, they are extremely active in the community and have received numerous awards for their service to the community. Both serve as members of the Haverhill Rotary Club and each has been named a named Paul Harris Fellow. They were recognized as the distinguished citizens of the year by the Yankee Clipper Council of Haverhill in 2008.

The Kluebers are tremendously dedicated and committed to Northern Essex Community College. They have proudly served on the NECC alumni advisory board since 2003 and are generous supporters of the college’s NECC Fund and the Alumni Association Scholarship Fund.