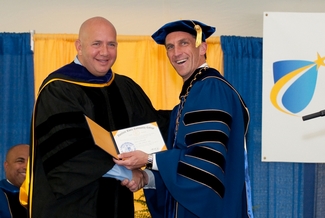 Just before the over 1000 graduates of the class of 2012 received their degrees, Northern Essex President Lane Glenn called the representative to the podium and awarded him a degree.

The presentation was designed to highlight new transfer agreements between Northern Essex and Salem State University.

Salem State students who transferred from Northern Essex to Salem State with a minimum of 18 credits and who have an accumulated total of at least 62 credits will be apprised of this opportunity by email and sent an application.

“Over 50 percent of Massachusetts community college students transfer before receiving a degree, including hundreds each year from Northern Essex,” said Glenn. “With the associate degree in hand, the student can immediately seek better employment, and may qualify for discounted tuition and other benefits at the university.”

Institutions in Texas, Michigan and elsewhere who have participated in similar reverse transfer programs have seen evidence of both increased retention rates at four-year institutions and higher rates of graduation from community colleges.

Northern Essex is working on a similar agreement with UMass Lowell.