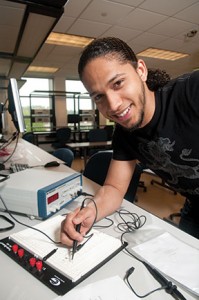 Herinell Linares has an impressive aptitude for math that he never knew he had until he enrolled at Northern Essex Community College.

In May, the 23-year-old Lawrence resident graduated from NECC with an associate degree in Engineering Science. In the fall he begins classes toward his Bachelor of Science in Electrical Engineering at UMass Lowell.

Born in the Dominican Republic, Herinell immigrated to the United States when he was 17. He arrived with a high school diploma and no grasp of the English language. Eager to learn English, he followed in his mother’s footsteps and enrolled in English as a Second Language classes at NECC in the summer of 2007.

By the time he was seated in a college-level math course, the professor noticed he was getting great grades with very little effort. Recognizing his potential, the professor encouraged him to think about pursuing an engineering degree.

“I signed up for a digital logic class,” he says. “After I took that class I knew I wanted to go into engineering.”

By the spring of 2010 Herinell was taking classes toward his associate degree in Engineering Science; all the while working nearly full time as a security guard at an apartment complex in Lawrence and occasionally as a banquet server for an area hotel. Herinell relied on the NECC shuttle to travel between Lawrence and Haverhill each day.

After earning his bachelor’s degree, Herinell hopes to find an engineering position with a large firm.

He says NECC launched his education and it can help others as well. “Northern Essex is a great place to start,” he said. “The classes are small and the professors get to know their students. You are not just an ID number here. ”