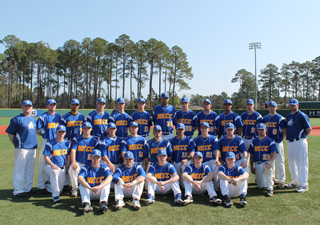 It was a bittersweet week for the Northern Essex Community College Knights men’s baseball team. The Knights, having won the National Junior College Athletic Association (NJCAA) District XXI championship, travelled to Tyler Texas to play against the top 8 teams in the country in the NJCAA National Championship World Series games.

The NECC Knights entered the Division World Series games, having won 17 straight games in a 28-7 season. The team led all Division 3 teams nationally in hitting with a .387 average.

They won the first two games of the World Series, defeating Montgomery College (Germantown, Maryland) on Saturday May 19, in a 9-1 blowout that was ended by a mercy rule in the eighth inning, and beating Niagara County Community College (New York) in a wild 6-5 win Sunday, May 20.

The Knights ended their triumphant season ranking third in the nation.

Players Lucas Reynolds of Manchester, NH, and Costas Tingas of Dracut earned top accolades being chosen for the NCJAA All-Tournament Team. The team consists of the top twelve players in the Division 3 NJCAA National Championships.