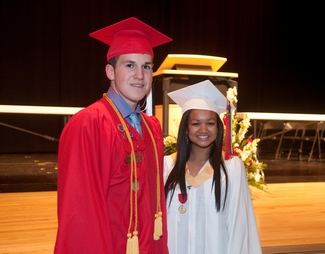 Twenty of the Amesbury High School seniors who were recognized at the high school’s baccalaureate program on Tuesday, May 29 had accumulated an impressive number of college credits while still in high school.

These students are the first to graduate from the Early College Program, an innovative partnership between the high school and Northern Essex Community College, designed to raise college readiness skills and college completion rates.

The group started taking college courses during their sophomore year and continued on throughout high school, earning both college and high school credits for the courses, which were team-taught at the high school by college professors and high school teachers.

Before the program started, many of these students did not see themselves as college-bound, according to Sue Grolnic, NECC dean. “When we started the program in the fall of 2009, we were looking for students in the middle-of-the-pack academically: those that had the aptitude to succeed but hadn’t yet proven themselves academically. We wanted to raise the bar, helping them to realize that college was in their future.”

Graduate Lyanh Harding-Lu says that participating in the Early College Program “raised her writing skills to a new level.” Harding-Lu will attend Emmanuel College in Boston in the fall, majoring in biology. She will arrive with over a year of college credits that can be transferred to Emmanuel. Harding-Lu received several awards at the baccalaureate including a platinum medal for honors, National Honor Society, the John and Abigail Adams Scholarship, and the Meteorology Award.

Bryer Sousa is also graduating with a year of college credits as a result of his participation in the Early College Program. Accepted to over a dozen colleges, Sousa has chosen to attend UMaine Orono and study chemistry/physics with a math minor as part of the university’s honors program.

Sousa estimates that he had to write “20 papers” during his senior year alone as part of the program. He took home several awards at the baccalaureate, including the math award, the John and Abigail Adams Scholarship, a Geology Award, and a Student Council Award.

According to Mary Beth Exner, head of guidance at Amesbury High School, all 20 students were accepted to colleges including Merrimack, University of New Hampshire, St. Anselm, Stonehill, University of Vermont, Mass College of Pharmacy, and more.

Due to the success of the program, Amesbury has continued to offer it each year. This past fall, Haverhill High School offered its own Early College Program, in partnership with Northern Essex, and, the fall of 2013, the program will launch at Sanborn Regional High School.