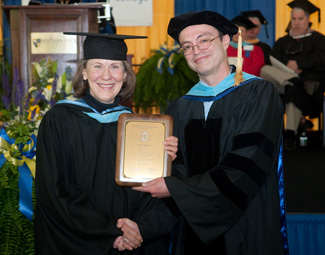 Hartleb was named President Emeritus of Northern Essex Community College while Thiefels was named Professor Emerita of English as a Second Language and Kelley was named Dean Emeritus of Instructional Student Support.

At Northern Essex, the rank of emeriti/emeritus is an honor that recognizes sustained excellence in performance, character, and meritorious service to the college.

Thiefels joined the college in 1978 as a part-time ESL professor. She retired in 2011 as a full professor. Over the decades she taught English to thousands of immigrants from many different countries. She also provided support and encouragement as her students learned to find their way in a new country, said NECC President Lane Glenn of Thiefels.

Janice Rogers, NECC’s assistant dean of academic presentation, recommended Thiefels for the honor, writing “Jane was an active member of the ESL faculty and was a champion for her students, especially for those who were underserved and in need of additional support to ensure their success in life and at the college. During her long tenure at NECC she helped to ensure the integrity of the ESL curriculum and of the overall educational offerings at NECC, serving on college-wide committees and advocating for quality programming and services.”

Thiefels graduated from Western Michigan University with a Bachelor of Arts in Elementary Education and a Master of Education from Antioch Graduate School. 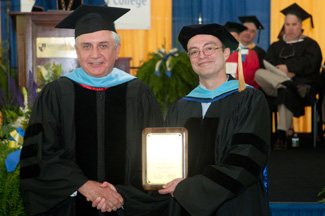 Hartleb served as the college’s third president from 1996 until July of 2011.

“For more than 16 years he led this college with compassion, proving great things can be achieved in a work environment that is inclusive and supportive,” said NECC President Lane Glenn in presenting the award. “David empowered college employees through new management strategies such as process management and Appreciative Inquiry.”

Glenn noted that under Hartleb’s leadership, enrollments increased significantly, especially among minorities, and public-private partnerships led to new facilities such as the Hartleb Technology Center and the fully renovated Behrakis One Stop Student Center in Haverhill and the Louise Haffner Fournier Education Center and NECC Riverwalk in Lawrence.

“He also worked long and hard to successfully gain state approval for the Dr. Ibrahim El-Hefni Health & Technology Center in Lawrence which is now under construction with plans to open in the fall of 2013,” said Glenn. “I am deeply grateful that David hired me as vice president of academic affairs in 2006. In the five years we worked together, I learned much from him.”

Kelley joined the college in 1978 as director of the learning resource center and he retired in 2011 as dean of instructional support with responsibility for developmental education programs, and library and media services.

“Everything David did was focused on improving the learning experience for our students, and he was known as an innovator, quick to adopt new strategies that would lead to student success,” said NECC president Lane Glenn in presenting the award. “Thanks to David’s leadership over the years, the college’s developmental program continues to be the envy of community colleges across the commonwealth. He also was a leader in developing statewide student outcome assessments and standards in the delivery of math curriculum.”

Later in his career, Kelley assumed the role as director of Mass Colleges online, which was created to promote the sharing of courses among community and state colleges in Massachusetts.