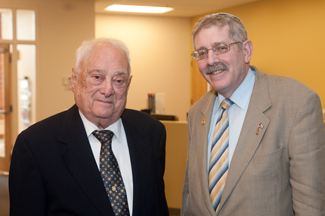 Kotzen is now living at Ashland Farms in North Andover. He started the CPE Institute in the basement of his Haverhill synagogue, Temple Emanu-el, 27 years ago. After connecting with Mel Silberberg, the former director of Northern Essex’s Center for Business & Industry, who was a member of the same synagogue, and then Northern Essex President John R. Dimitry, who he knew through Rotary, Kotzen moved the institute to the college two years later.

In its 25 years at the college, the center has grown significantly, providing professional development for over 6000 accounting professionals. Throughout the years, one thing has remained consistent: Kotzen’s leadership.
Ceremony emcee Kelly Osmer of Northern Essex Corporate and Community Education said Sid’s program is “one of the most successful—if not the most successful—professional development program at the college.”
“Sid worked tirelessly to make the program a success, researching new topics and setting up speakers.”
NECC President Lane Glenn announced the honor and presented Kotzen with a certificate “in recognition of his outstanding contributions to continuing education.”

Also speaking at the ceremony were former Northern President John R. Dimitry and Richard DelGuadio, CPA, who has taught at the institute for many years.

Over 100 people attended the ceremony and luncheon including Kotzen’s family, area accountants, Rabbi Ira L. Korinow and members of Temple Emanu-el, and his Ashland Farm neighbors.

For more information, contact Ken Eisenberger at 978 659-1213 or keisenberger@necc.mass.edu.