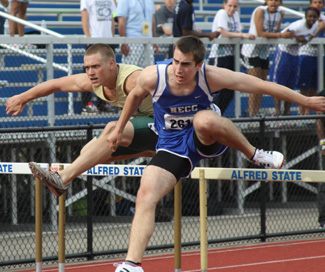 Anthony Giorgi of Sandown, NH, (right) will attend the University of New Hampshire in the fall. He is one of several NECC athletes who will head to a four-year anniversary.

For many student athletes, Northern Essex Community College is a stepping stone to four-year colleges and universities. This year is no exception. Ten members of the Northern Essex Community College’s championship baseball team—which was third in the nation— and one member of the men’s track team—which sent three athletes to the national competition— will be studying at four-year institutions this fall. Each will be playing his respective sport as well.

“We are very proud of our student athletes for their performance on the field and their success in the classroom,” says Susan MacAvoy, athletic director. “And I know they will excel at the four-year colleges and universities.”