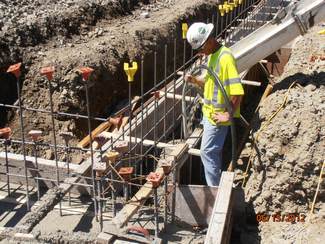 If you’ve driven past the future site of NECC’s El Hefni Health & Technology Center on Common Street in Lawrence recently, you have likely noticed that within the chain link fence that surrounds the site there’s a great deal of activity taking place.   Bulldozers, cement mixers, and excavators are all operating in full force, as workers create the foundation of the building.

At the June meeting of the board of trustees, President Lane Glenn acknowledged the progress being made and said “We are so happy that this is off the ground.”

Scheduled to open in the fall of 2013, the new building will replace the InTown Mall, a dilapidated three-story building built in the early 1960s, which was torn down last winter to make room for the college’s new facility.

When completed, the $27.4 million El Hefni Health and Technology Center will house the majority of the college’s 18 health care associate degrees and certificates, including respiratory care, sleep technology, and nursing programs.

The El-Hefni Health and Technology Center is part of a larger plan for growth in Lawrence, according to Glenn. In recent months, a chemistry lab was added to the Louise Haffner Fournier Education Center on Amesbury Street and the college leased a facility on Franklin Street to house iHealth@NECC. NECC Riverwalk on Merrimack Street opened in the fall of 2010. The college also recently purchased the Registry of Deeds Building in Lawrence with plans to create an open green space.