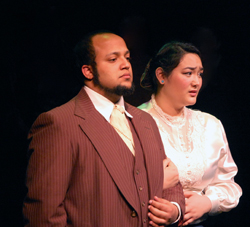 When Northern Essex Community College theater student and aspiring filmmaker Dustin Kelly of Amesbury asked friends and family members to help finance his trip to Edinburgh, Scotland to perform in a prestigious theater festival he decided that for their generosity they should receive something in return – a video log.

So Kelly, one of a 14 NECC students to participate in the Fringe Festival in Scotland this August , is creating a video log that chronicle’s the troupe from its earliest rehearsals through its final performance in Scotland.

This is just one of the creative ways in which the students have financed the trip. Earlier in the year, a comedy night was held to help defray the $20,000 price tag.

“Because of significant contributions from the NECC Foundation, ticket sales to productions, book and bake sales, the comedy night, as well as generous donations from current and former faculty and staff, the Top Notch Players have raised the funds to go to the Edinburgh Fringe,” according to Sanders. “We are grateful to all who have made this trip possible.”

This is a trip of a lifetime for many in the theater troupe as many of them have never traveled out of New England let alone to the British Isles. Their participation in the theater festival falls under the college’s study abroad program.

The cast and crew, who are all members of NECC’s theater troupe, the Topnotch Players, along with theater professor Susan Sanders, will spend 12 days and 11 nights participating in the festival. They will perform their NECC March play, “American Gothic; The Poems of Edgar Lee Masters,” four times as part of their involvement in the festival.

Upon completion of the trip, the students will receive three college credits through NECC’s study abroad program.

Ranging in age from 18 to 40, the student actors will juggle multiple roles and characters using songs and dances from the mid-1800s to the early 1900s as transitions. This is an original adaptation of selected poems in Master’s Spoon River Anthology.

NECC is just one of less than a dozen colleges invited to participate in this theater festival.