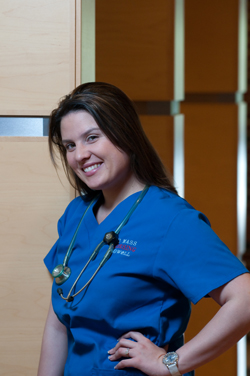 Melissa Ospina came to Northern Essex to learn English. She left with an associate degree, admission into UMass Lowell’s nursing program, and the love of her life.

The Haverhill resident emigrated from Colombia just nine years ago. She enrolled in the college’s ESL program and then in general studies classes. In 2009 she graduated with a 3.9 GPA, but not before meeting her future fiancé in an English class.

Immediately she applied to UMass Lowell’s nursing program. “Transferring was easy,” Melissa says.
Initially she was told the nursing program was full, but after one look at her academic and personal record Melissa gained admittance. She graduated in May 2012. She hopes to work as a nurse at a clinical site after passing the nursing boards.

Melissa set her sights on UMass because of its bachelor and master degree programs. She plans to enroll in the master’s in family health nursing. “I love the flexibility that a family health degree offers,” she says. “It provides so many options.”

UMass Lowell, she says, was the perfect school for her. “I was able to transfer 60 credits from Northern Essex. I could commute and it wasn’t too expensive,” she says.

NECC prepared her well, she says, for academic life at a large university. The mandatory ESL and developmental classes, she says, created a strong educational foundation.

“Northern Essex prepares you for the real world. All my professors were so helpful. They were so approachable,” she says. “For me it was a great experience. Northern Essex gave me a lot … my degree, my future as a nurse, seven of my closest friends, and my best friend and love of my life.”