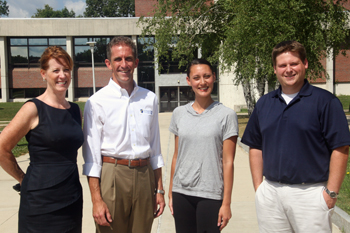 Deane, herself a 1999 graduate of Northern Essex, has worked at the college for five years. She is currently the NECC dance coordinator and assistant professor.

She was nominated by English professor Linda Desjardins who lauded her for her work in creating a faculty and staff “Flash Mob” last year at the NECC 50th Anniversary Picnic.

“Michelle Deane found the music, imagined the possibilities, choreographed a routine, and then taught a self-admitted bunch of uncoordinated faculty and staff to replicate what she was doing.” She called Deane’s leadership “inspiring and encouraging”.

In addition to an associate degree in liberal arts dance option degree from NECC, Deane holds a bachelor of fine arts from UMass Amherst.

Scionti came to Northern Essex nearly four years ago as a systems analyst. She is currently employed as an enterprise resource planning project leader.

Fellow colleague Sharon McDermot nominated Scionti for her work in developing a highly successful program used by the Awards Convocation Committee that streamlined an annual process.

She holds a Bachelor of Science degree in Management Information Systems from UMass Lowell.
For three years West has worked as a lab technician and safety officer at Northern Essex.

“Bob responds to each challenge with characteristic kindness and good humor,” wrote Cross. “The instructors in the Natural Science department would be lost without him and I am extremely grateful that he has chosen to work at Northern Essex.

West earned a Bachelor of Science degree in Health Science from Merrimack College in 2006.