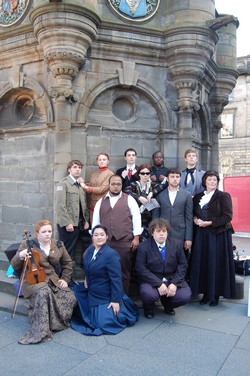 NECC Theater Students have returned from Edinburgh Scotland after the experience of a lifetime, performing in the Edinburgh Fringe Festival.

The cast and crew, who are all members of NECC’s theater troupe, the Top Notch Players, along with theater professor Susan Sanders and Professors Tom Greene and Alisa Bucchiere, spent 12 days and 11 nights participating in the festival. They performed their NECC March play, “American Gothic; The Poems of Edgar Lee Masters,” four times as part of their involvement in the festival.

Upon completion of the trip, the students received three college credits through NECC’s study abroad program.

Ranging in age from 18 to 40, the student actors juggled multiple roles and characters using songs and dances from the mid-1800s to the early 1900s as transitions in American Gothic which is an original adaptation of selected poems in Master’s Spoon River Anthology.

The Fringe Festival review of the performance singled out NECC student Hannah Heckman-McKenna for her acting talents and also found other things to like.

“It must be said that this production had a certain charm about it. The poetry of Lee Masters is engaging, poignant and – for the most part – this came across in the company’s delivery. The enthusiasm of the company was also palpable and ultimately the NECC Top Notch players can be pleased with their offering to this year’s Fringe.

The $20,000 price tag for the trip was financed in creative ways, according to Professor Susan Sanders.

“Because of significant contributions from the NECC Foundation, ticket sales to productions, book and bake sales, the comedy night, as well as generous donations from current and former faculty and staff, the Top Notch Players raised the funds to go to the Edinburgh Fringe,” according to Sanders. “We are grateful to all who have made this trip possible.”

Less than a dozen colleges invited to participate in this theater festival.