Artist’s Carousel Designs to be Exhibited at NECC 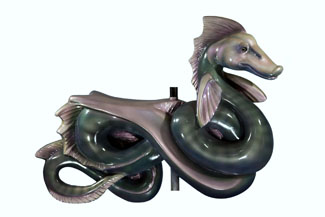 “Carousels of the 21st Century; The Sculpture of Jeffrey Briggs,” will be on exhibit Thursday, Sept. 13, through Saturday, Oct. 13, in the Northern Essex Community College Bentley Library ArtSpace on the Haverhill campus, 100 Elliott St. ArtSpace Gallery hours are Monday through Thursday 2 to 9 p.m. Friday 2 to 5 p.m. and Saturday 9 a.m. to 1 p.m. The gallery is closed Sundays and holidays.

This exhibit, which is a sculpture show, is sponsored by the NECC Art, Design & Photography Department. The pieces in the show consist of sculptural scenery panels and sculpted carousel animals. Each Briggs piece was painted by William Rogers of Newburyport. Also on display will be a series of process photographs of each piece taken by Newburyport photographer John Raleigh. This show was originally mounted at the New England Carousel Museum in Bristol, CT.

Briggs, 65, worked as a sculptor and principle designer for the Fabricon Carousel Company for more than 25 years creating a number of Grand Carousels which continue to operate in Singapore, Finland, Saudi Arabia, Bolivia, and throughout the United States.

He is currently designing a custom carousel for the Rose Kennedy Greenway in Boston. It is scheduled to open in 2013.

“The actual anatomy of a real animal can almost be frightening, while its carousel counterpart should be fun and whimsical,” says Briggs. “I try to retain as much of the character of the real animal as possible playing up the most intriguing features of each one.”

Briggs earned a bachelor of art degree from Tufts University and his diploma from the Boston Museum School of Fine Arts.

He has collaborated with his wife Lindley on sculptural design projects for the past 40 years.