Basketball and Academics Made NECC the Right Choice for Manchester Woman 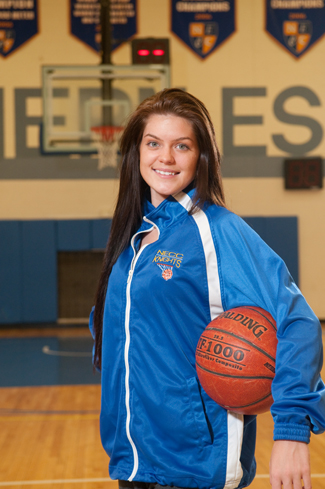 Northern Essex Community College wasn’t Erica Gale’s first choice for college, but it happens to be where the basketball standout rebounded both academically and athletically.

When she graduated from Goffstown High School in 2009, unsure of where or what she wanted to study, the now Manchester resident enrolled in a small community college that didn’t offer sports. After years of playing AAU basketball, she felt lost without a basketball in her hand.

After two semesters, Erica looked around and decided NECC had what she was looking for — it had a great reputation for both academics and athletics, it was affordable, and it was just a 30-minute drive down the highway.

Erica was eager to enroll in a larger college with a campus and more academic offerings. She was also eager to be back on the basketball court and to once again be part of a team.

Drawn to the allied health programs, Erica quickly settled into the EKG certificate program. She graduated from the program in May. The exposure she received in the medical environment sparked a further interest in the medical field as well as a desire to continue her education.

In the fall, she will transfer to Suffolk University in Boston taking more than 40 credits with her as well as an aspiration to play basketball for the private four-year college. She will be enrolled in the radiation biology program.