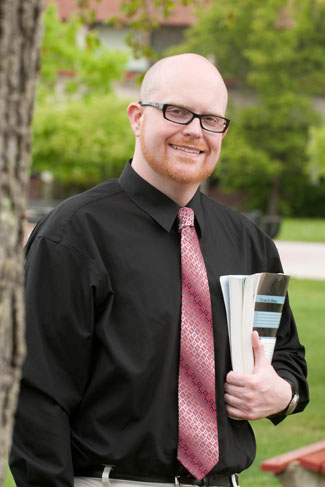 Michael Martino has wanted to be a teacher since second grade. In May he came one step closer to achieving his goal when he received his associate in liberal arts with a middle/high school teaching option from Northern Essex.

In September he will transfer to Salem State University, taking classes toward a bachelor’s in English with a minor in secondary education.

“My favorite thing to do when I was young was play school. Now I am turning it into my life’s passion,” he says.

Though he graduated from Everett High School in 2002, life events, including the deaths of his maternal grandmother and mother, interrupted his education. Instead, Michael worked successfully in both security and retail management. “I knew I would eventually go to college. When I graduated from high school, I just wasn’t there yet,” says the now Methuen resident.

At an early age he understood and appreciated the value of a good educator. “I knew I could deliver a positive experience to the world of education. That dream never changed,” he says.

Today, Michael dreams of teaching in a high school where he can focus on English.

In 2009 he enrolled at NECC only to step away for another few semesters. When he returned, Michael did so with enthusiasm, immersing himself in all aspects of college life.

He was president of the Gay Straight Student Alliance, served as a student senator, student ambassador, and orientation leader, and was actively involved in the Student Leadership Development Program.

As a first generation college student Michael was involved with the PACE Program enrolling in its scholarship and resume writing workshops. The writing, math and computer labs were also valuable tools for the 28-year-old.