Coach Shanahan Moves on to Another Diamond 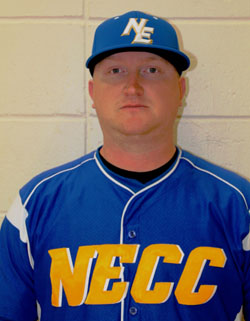 “It was a tough decision,” says the 33-year-old Merrimack, NH, resident. “But my next job is closer to home. I will be a full-time assistant coach of hitters and catchers as well as recruitment coordinator. It is a step forward for me. I have always wanted to coach baseball full time. This will allow me to see what I can do when I can coach full time.”

Shanahan came to NECC four years ago when there were just a little more than a dozen baseball players. After one year as assistant coach he assumed the role of head coach. Under his direction, last year, the team won the conference and this year he took the team to the National Junior College World Series in Texas where they placed third in the country.

“It is a shock to lose him,” said NECC athletic director Sue MacAvoy. “We have had a great time with Chris as head baseball coach. He has helped the team achieve an amazing accomplishment. It’s been a fun ride.”
MacAvoy says she and Shanahan have been of one mind when it comes to the players being proper student athletes.

“It wasn’t always about the baseball,” she says. “It was important to him and me that they grow into respectful young men.”

Shanahan says he is proud of the NECC Knights baseball team.

“Taking them to the world series was great, but seeing them grow, graduate, and move on to four-year schools, in some cases division 1, has given me a real sense of accomplishment.”

Shanahan and MacAvoy met with the team—including 12 returning players— this week to share the news and talk about moving forward. A search for Shanahan’s replacement will begin soon. “We hope to continue Chris’s success by doing whatever is possible to bring in someone who shares his philosophy and goals for our student-athletes on and off the field.”