On Friday, October 5, just over a month before the presidential election on 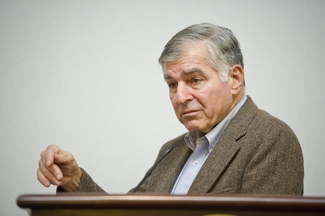 Tuesday, November 6, Governor Michael Dukakis will visit Northern Essex Community College’s Haverhill Campus to share his experiences as the Democratic nominee for president in 1988 and his thoughts on the importance of voting and civic engagement.

The college’s Contemporary Affairs Club will host a voter registration drive in conjunction with the presentation and Northern Essex Professor Richard Padova will display political campaign memorabilia from his collection.

Born in Brookline, MA, Dukakis served four terms in the Massachusetts legislature, beginning in 1962.  In 1970, he was the Massachusetts Democratic Party’s nominee for Lieutenant Governor and the running mate of Boston Mayor Kevin White in the year’s gubernatorial race which they lost to Republican Frank Sargent and Donald Dwight.

Dukakis won his party’s nomination for Governor in 1974 and beat Sargent. He inherited a record deficit and record high unemployment and is generally credited with digging Massachusetts out of one of its worst financial and economic crises in history. But the effort took its toll, and Dukakis was defeated in the Democratic primary in 1978 by Edward King. Dukakis came back to defeat King in 1982 and was re-elected to an unprecedented third four-year term in 1986 by one of the largest margins in history. In 1986, his colleagues in the National Governors’ Association voted him the most effective governor in the nation.

Dukakis won the Democratic nomination for the presidency of the United States in 1988 but was defeated by George Bush and soon thereafter announced that he would not be a candidate for re-election as governor. He left office in January 1991.

Dukakis is a Distinguished Professor of Political Science at Northeastern University and a visiting professor at the School of Public Policy at UCLA. His research has focused on national health care policy reform and the lessons that national policy makers can learn from state reform efforts.

Dukakis was nominated by President Clinton for a five year-term as a member of the new Board of Directors of Amtrak, The National Railroad Passenger Corporation, on May 21, 1998, and was confirmed by the Senate on June 25, 1998. He currently holds the position of Vice-chairman of the Amtrak Reform Board.

For more information on this event, contact Richard Padova, rpadova@necc.mass.edu or 978 556-3297.