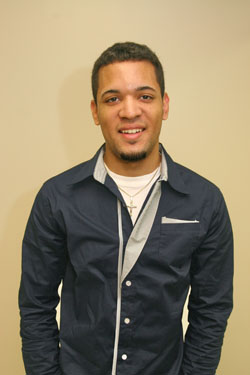 Safe Steps, a salt and sand sprinkler system designed to dissolve snow and ice during the winter, is the creation of Northern Essex Community College student Alexander Acevedo who used a $500 Campus Catalyst grant to explore its merit.

Campus Catalyst is sponsored by the Merrimack Valley Sandbox Initiative, which gives college students seed grants to try out and experiment with their entrepreneurial ideas and builds connections entrepreneurial advisors and between each other.

Acevedo, an NECC engineering student, is just one of more than 200 students from the partnering schools who have participated in a diverse range of projects. The program provides up to $500 in Stage 1 for innovative and entrepreneurial projects developed by students.

Now that Alexander has developed his idea, he moves on to Step 2, receiving $750, which means he has a clear plan for development or expansion with a team of 2 or more members with different skills and roles that will help build on his idea.

The final step is Stage 3. If the team qualifies if it can show the existing project has demonstrated growth. Upon completion of Stage 3 the idea transitions into the Sandbox Entrepreneur Program to help move forward with the venture.

This initiative is funded by the Deshpande Foundation. NECC is in partnership with UMass Lowell, Merrimack College, and Middlesex Community College.

In just under two years NECC has had 11 teams compete in Campus Catalyst, three of which moved to Stage 2.

Campus Catalyst is now looking for the next “big idea” from student entrepreneurs. Proposals are being accepted on a rolling basis until Oct. 12. NECC students interested in this program should contact Dawna Perez at dperez@necc.mass.edu