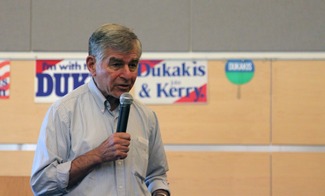 “It’s great to be back in my mother’s hometown,” said Dukakis, who was governor of Massachusetts for 12 years and the Democratic nominee for president in 1988.

Dukakis was in Haverhill at the invitation of Northern Essex History and Government Professor Richard Padova. He was asked to share his experiences as the Democratic nominee for president and his thoughts on the importance of voting and civic engagement.

Dukakis expressed no regrets about his run for president. “We like the pressure and we want to make a difference and that’s why we run.”
In hindsight, he says his mistake was in not responding to negative campaigning, noting his opponent’s aggressive criticism of the Massachusetts furlough system.

While running for president and under the protection of the secret service, he did find it difficult to adjust to the lack of freedom, having always prided himself on being accessible. “As Governor, I took the street car to work and riders would approach me ‘Hey, governor. Can I talk with you.’ I learned so much from those conversations.”
Referring to the challenges he faced when first running for office as a first-generation immigrant with a “funny name”, Dukakis urged the audience which included students, college faculty and staff, and members of the community to get involved. “If you’re thinking about running for public office, don’t think you can’t do it.”

While in Haverhill, Dukakis took time to advocate for public transportation, a strong educational system, and access to quality health care and called himself a “huge fan of community colleges.”
The League of Women Voters of Greater Haverhill and the college’s Contemporary Affairs Club hosted a voter registration drive in conjunction with the presentation which resulted in 30 new registered voters. Professor Rich Padova displayed his collection of political campaign memorabilia including posters from Dukakis’s presidential run.
Born in Brookline, MA, Dukakis served four terms in the Massachusetts legislature, beginning in 1962. He served three terms as governor from 1974 to 1978 and from 1982 to 1990.

Dukakis won the Democratic nomination for the presidency of the United States in 1988 but was defeated by George Bush and soon thereafter announced that he would not be a candidate for re-election as governor. He left office in January 1991.

Dukakis is a Distinguished Professor of Political Science at Northeastern University and a visiting professor at the School of Public Policy at UCLA.