Exploring the 1912 Bread and Roses Strike 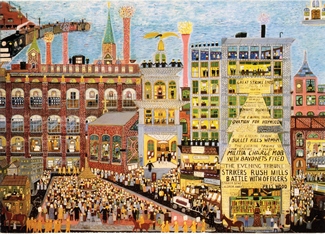 A symposium exploring the 1912 Bread and Roses Strike in Lawrence will be held on Wednesday, Oct. 24, from noon to 3 p.m. at Northern Essex Community College’s Hartleb Technology Center, 100 Elliott St., Haverhill. This event is free and open to the public.

The symposium, a centennial observance of the of the Great Lawrence Strike of 1912 better known as the Bread and Roses Strike, will look at the impact of the strike and its relevance today. Speakers will include Bill Fletcher from the AFL- CIO, a national trade union center and largest federation of unions in the United States, and Ethan Snow of UNITE HERE, a labor union in the United States and Canada with more than 265,000 active members who work predominantly in the hotel, food service, laundry, warehouse, and casino gaming industries.  In addition, storyteller Sharon Kennedy will reenact the Bread and Roses Strike from the point of view of some of the strikers.

This centennial symposium is sponsored by the NECC Department of Global Studies.