NECC Student is honored for Military Service at National Conference 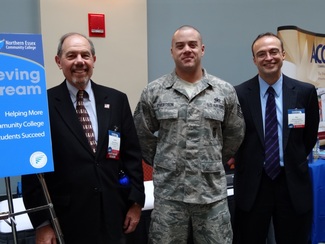 NECC student Erik Syvertson, a freshman majoring in Physical Education, Exercise Science, and Sports Studies, was honored for his service to his country at the opening session of the American Association of Community College Trustees (ACCT) national conference held in Boston on October 12.

As part of the Salute to the Armed Forces, Syvertson was recognized in front of an audience of 1600 community college trustees and presidents from across the country.

He enrolled at Northern Essex in the fall and plans to transfer to Salem State University, with the ultimate goal of becoming a physical education teacher.