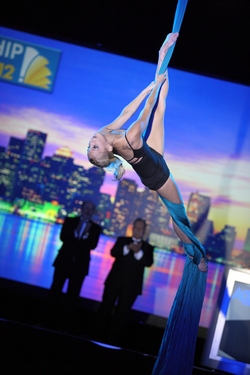 The event was part of the 2012 ACCT Congress which was held at the Sheraton Boston hotel and Hynes Convention Center from October 10 – 13.

Over 1,700 hundred community college trustees and presidents and national and state leaders watched as Hallett performed an aerial ballet suspended high above the convention center ballroom.

Hallet’s five minute performance was preceded by a dance performed by NECC dancers Kadee Tapley of Amesbury and Amanda Westcott of Derry, NH.

A dance and psychology major at Northern Essex, Hallet plans to transfer to the University of New Hampshire in the spring to continue her studies and participate in the college’s Aerial Dance Program.  She teaches at Steppin’ Out Dance Academy in Kingston, NH, where she learned aerial ballet.

Both Tapley and Westcott are dance majors at Northern Essex. 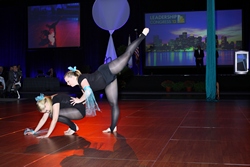 Kadee Tapley of Amesbury and Amanda Westcott of Derry, NH