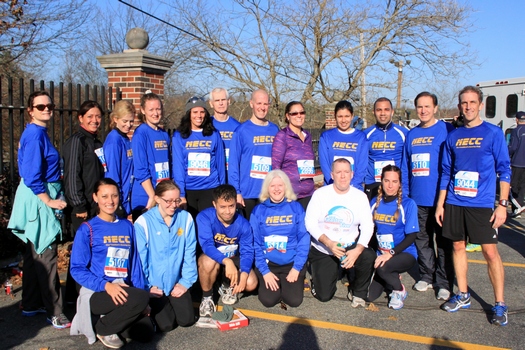 Wearing royal blue running shirts that proclaimed “we run the campus,” NECC runners stood out from the crowd of over 10,700 runners.

The NECC group, including students, faculty and staff, and President Lane Glenn, began practicing for the Feaster Five in September.  Every Monday, the Haverhill Campus group would run three times around the campus, slowly at first and then eventually working up to race speed.   A Lawrence Campus group typically ran early in the morning.

All 18 NECC runners completed the 5K or 5 mile race, bringing home a Table Talk apple pie for their efforts.

The President’s Running Club will begin meeting again in early February in preparation for the First Annual Northern Essex Community College Campus Classic 5K Road Race which will be held on the Haverhill Campus on Saturday morning, May 4.

New runners, both novices and those who are experienced, are welcome, and should contact Maureen Saliba, intramural sports, msaliba@necc.mass.edu, to sign up.