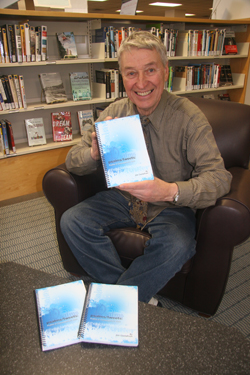 If King David and the other psalmists were Tweeters, what would they have tweeted?

That is a question Jim Gustafson, retired minister and Northern Essex philosophy and religion professor, asked and answered.

His answers can be found in his spiral-bound, 175-page book titled “psalms/tweets: Psalms in Contemporary Style,” which he published recently with the help of friends in the publishing business. Already he has sold more than 200 books with another 400 on the way. He asks only for a donation to the Benevolent Fund of the West Congregational Church in Haverhill where he served as minister during the 1960s and associate pastor until 2000. He continues to preach when needed and remains the church organist.

This is not Gustafson’s first foray into the world of publishing. He has authored a textbook, a history of the West Congregational Church, and blogs regularly about his travels. His wife Eleanor is also an author having just completed her sixth novel.

Gustafson, says he has been reading, studying, and preaching, the bible for decades. The psalms, he notes, were originally written in Hebrew and meant to be sung.

“They don’t really grip you today as they did then,” he says. ”I began to think, what if they lived today? What would they do? Maybe they would tweet.”

Using his imagination and poetic license he has rewritten all 150 psalms as Tweets, though many do not adhere strictly to the 140 characters. Using slang and modern day expressions, Gustafson condensed the psalms to 50, 20, or in some cases 10 percent of the original text. 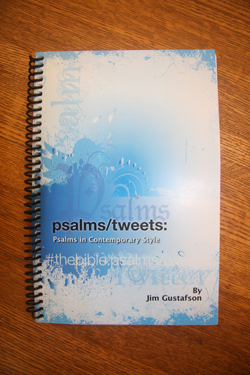 “I started with a psalm or two,” he says. “I looked at the various translations of the psalm and reduced it, in my own words, looking for that emotional impact…that raw emotion. I began posting them on my Facebook page and received positive feedback from several hundred of my friends. I started thinking then that the idea maybe had some life to it.”

The 78-year-old opted for a spiral-bound format so the reader can lay the book flat and write his or her own thoughts on the lines beneath the tweeted psalm.

One sample tweet is psalm 70 which reads “Quick, Lord! Rescue me! Enemies are out to destroy and humiliate me, saying, “Aha! We’ve pinned him down!” Let them know humiliation and shame. But, hurry Lord, I am weak and need You to save me!”

You can purchase a copy of the book through Gustafson by contacting him at jgustafson@necc.mass.edu

Gustafson, although retired, continues to teach at NECC as an adjunct faculty member. He also travels regularly on missionary trips. Since 2002 he has visited India yearly and Kenya biennially.

A long-time Haverhill resident, he moved here in the fall of 1959 while pursuing a PhD at Boston University. He was looking for a church where he could minister on a part-time basis. He found it at the West Congregational Church on Route 97 in Haverhill.