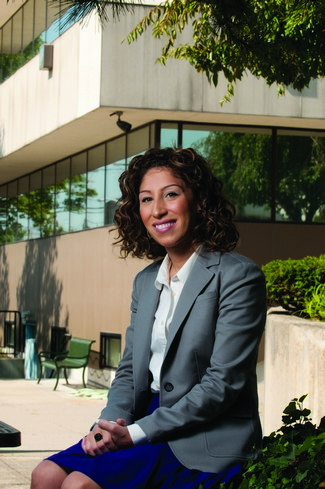 After graduating from Lawrence High School in 2006, Shalimar Quiles was ready to experience someplace new so she enrolled at an out-of-state university. One semester later, financial reality set in, and she decided to return home and attend Northern Essex.

“I had accumulated thousands of dollars in loans after just one semester in Connecticut,” she explains. “I realized that if I transferred to Northern Essex, I could pay my way with my part-time job.”

At Northern Essex, Shalimar discovered “a strong sense of community,” something that had been missing at the larger university she attended.

“I built partnerships with my peers, professors, and college staff,” she says. “From career counseling to academic support to internships, I took advantage of just about everything the college offered.”

After earning an associate degree in liberal arts with journalism/ communication option and high honors, Shalimar transferred to Simmons College in Boston to continue her studies in art, communications, and Spanish.

With her bachelor’s degree in hand, she landed a job in community/parent relations with Unlocking Potential, a nonprofit educational group.

In 2012, she was recruited back to Lawrence by Jeff Riley, Lawrence Public School System superintendent/receiver, who hired her as scholarship re-engagement manager, a position in which she’s tasked with keeping students engaged in school.

Although her job keeps her very busy, Shalimar fully intends to continue her education and would eventually like to earn her master’s in higher education.

“Urban education is the perfect field for me,” says Shalimar. “Northern Essex was a critical stepping stone, preparing me academically for my future and allowing me to have experiences that helped me to choose my professional path.”