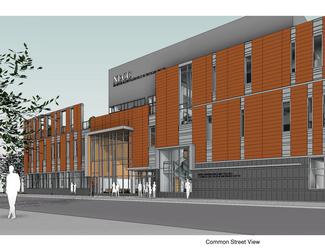 The Registry of Deeds Building in Lawrence—now owned by the Northern Essex Community College Foundation— will be demolished later this month, making room for green space connecting two of the college’s downtown Lawrence buildings.

When completed, the 41,500 sq. ft. site will provide a walkway between the college’s Dr. Ibrahim El Hefni Allied Health & Technology Center on Common Street —scheduled to open in the fall of 2013—and the Louise Haffner Education Center on Amesbury Street.  The college has two additional buildings in Lawrence: the Dimitry Building on Franklin St. and the iHealth Building, also on Franklin St.

“When the green space is completed and our Allied Health & Technology Center opens, we will be closer to accomplishing the college’s goal of a complete urban campus in downtown Lawrence,” said Lane Glenn, president of Northern Essex.  “This will be a great advantage for the city, providing additional educational opportunities for local residents and a larger pool of workers for area employers.”

The foundation purchased the Registry of Deeds building, 281 Common St., Lawrence, in 2011 at auction from the Department of Capital Asset Management for $203,500.   Built in 1950 as a court house and then turned into a Registry Building in the 1990’s, the building had been empty for more than 15 years before the foundation purchased it.

On Dec. 26, a company contracted by the foundation began the removal of hazardous material from the site, a one and a half week process, which will be followed by demolition.  The college plans to have the green space completed by July 1 of 2013.

“The green space and the new Allied Health & Technology Center will enhance the look of downtown Lawrence,” said Glenn.  “They will help beautify a very visible spot in the city.”

When completed, the $27.4 million El Hefni Health and Technology Center will house the majority of the college’s 18 health care associate degrees and certificates, including respiratory care, sleep technology, and nursing programs.