LAWRENCE — For Lane Glenn, president of Northern Essex Community College, expanding in the city is more than just putting up new buildings. “It also means being the best partner we can be to the city, to area businesses, organizations and to the schools where our students are preparing their college experience today,” he said.

Glenn spoke to staff and faculty members of Northern Essex yesterday during its convocation before the start of the spring semester. For the first time in the college’s history, the meeting was held off campus, at Lawrence High School.

Glenn said the school wants to show its commitment to staying in the city.

“One of our important goals as a college right now is to develop a comprehensive campus in downtown Lawrence and we are well on our way,” Glenn said.

“That’s why we’re here at Lawrence High School, to spend some time together seeing and talking about those thing.” Jeff Riley, superintendent/receiver of Lawrence Public Schools, said the turnaround plan for Lawrence is not a blanket approach as done by the State Department of Education in other cities.

“I don’t have a magic wand; whatever we do every one needs to get together to do it,” Riley said.

Even though the focus was primarily on Northern Essex’s campus in Lawrence, Ellen Grondine, assistant vice president for Planning and Strategic Initiatives, highlighted several programs in the works the college is doing with kindergarten through high schools in Greater Lawrence and Haverhill.

“All these initiative have the same goal in mind to have students thinking about college,” Grondine said.

Among them are “Achieving the Dream,” a national program which aims to improve the success of students at community colleges; the Academic Master Plan that includes goals for distance education, career preparation and core academic skills and “Leadership Academy” a year-long program where participants share skill through reading, discussions, presentation of leadership models and complete a project.

Glenn also referred to the story in Boston Magazine last year which highlighted the high crime rate, poverty, drug problems in Lawrence. “It’s not that the article wasn’t true; they are also only part of the story,” Glenn said. “Lawrence is not a City of the Damned, and clearly it is not a Garden of Eden. It is a community of people with challenges and with tremendous strengths.” 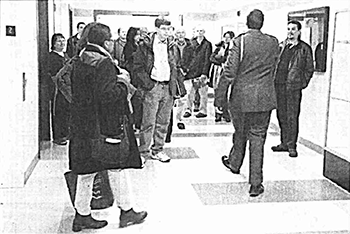 AMY SWEENEY/Staff photo Staff and administrators from Northern Essex Community College get a tour of Lawrence High School by Douglas Hernandez, who is a member of the ROTC. NECC held their convocation at LHS for the first time yesterday.