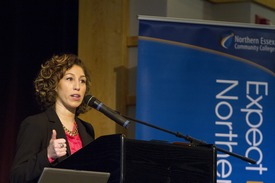 Shalimar Quiles, a 2008 graduate of NECC, is now scholars re-engagement manager for the Lawrence Public Schools

Hundreds of Northern Essex faculty and staff members as well as representatives from local community organizations gathered in the auditorium of the performing and fine arts high school for presentations and a tour of the high school which opened in 2007.

Presentations included the “History of Lawrence” by NECC Professor Richard Padova; “The Future of the Lawrence Public Schools” by Superintendent Jeff Riley, and “Getting Students Ready for College: K-12 Initiatives” by Ellen Grondine, NECC’s assistant vice president of planning and strategic 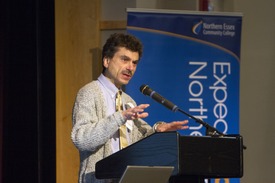 Shalimar Quiles, who graduated from Lawrence High School in 2006 and from Northern Essex in 2008, and is now scholars re-engagement manager for the Lawrence Public School System, shared her own story and provided some perspective on how the college can help Lawrence High School students to succeed.

Acknowledging the challenges in Lawrence, including low college success rates, Quiles said “Despite that, I’m optimistic. The list of what we can do better as a school district is long, but achievable—And it requires we work with the community at large—because we all know, it takes a village.”

The importance of partnerships was a theme echoed throughout the morning program. In his remarks, President Glenn recognized Lawrence’s “talented and dedicated” partners including Heather McMann of Groundwork Lawrence, Evelyn Friedman of the Greater Lawrence Community Action Council, Todd Fry and David Parker of Merrimack Valley Sandbox, and Jess Andors of Lawrence Community Works.

He also shared the college’s plans to build a comprehensive campus in Lawrence, describing recent activity in the city. In the last two years, the college has opened classroom and corporate training facilities at the Riverwalk and a new iHealth facility downtown; begun construction on the Ibrahim El Hefni Allied Health and Technology Center, which opens this fall; and purchased the old Registry of Deeds building to make way for green space.
“The college is on the move in Lawrence,” he said. 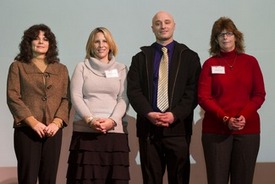