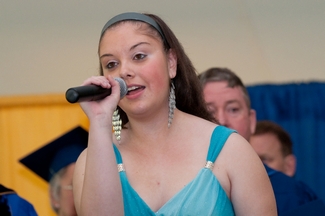 The video for this song has been nominated for “Video of the Year” for the Limelight Magazine music awards in Providence, RI.

When asked why she decided to write this song for the band, McCarthy said, “I use music to tell people things I can’t usually speak, so knowing that people find my words on bullying so powerful really means a lot to me.”

McCarthy is in her second year at NECC pursing a degree in music. On campus she is a part of the NECC Chorus. She has written over 100 original songs. Since she started performing at the age of 12, McCarthy has played at numerous venues including Boston’s Hard Rock Cafe, Six Flags New England, Massachusetts State House, The Sad Cafe, Ground Zero, and more.

Northern Essex offers an associate degree in music and a certificate in music technology.  Students have the opportunity to perform in the Chorus & Music Club or with one of the college’s music ensembles.

To learn more about Amanda McCarthy or to hear her music visit www.facebook.com/AmandaMcCarthyMusic