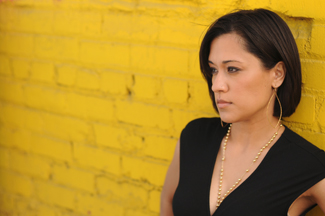 Mayda del Valle, acclaimed poet and spoken word artist, will present a White Fund Lecture titled “The Passion of Poetry and the Power of Artistic Expression “in partnership with Northern Essex Community College on Thursday, March 7, at the Lawrence High School, 70-72 North Parish Road, from 8:45 to 10 a.m. This event is free and open to the public.

Chosen by Oprah’s O Magazine as one of 20 women on the first “O Power List,” del Valle has been described by the Chicago Sun Times as having, “a way with words. Sometimes they seem to flutter and roll off her lips. Other times they burst forth like a comet streaking across a nighttime sky.”

A native of the South Side of Chicago, she began performing her own writing while in high school and relocated to New York City after graduating from Williams College with a Bachelor of Arts in Art.

In 2001 she won the National Poetry Slam Individual Championship, becoming the youngest poet, and the first Latino person to win the title. She appeared in several episodes of “Russell Simmons Presents Def Poetry”. Del Valle was an original cast member and contributing writer of the Tony award winning production of “Def Poetry Jam” on Broadway, and toured internationally with the show. Del Valle has been featured in numerous publications.

In 2009 she performed at the White House for President Obama and the First Lady.

For additional information or to be notified of upcoming events in the White Fund Enlightenment Series, call 978-738-7403 or visit the website at www.necc.mass.edu/whitefund