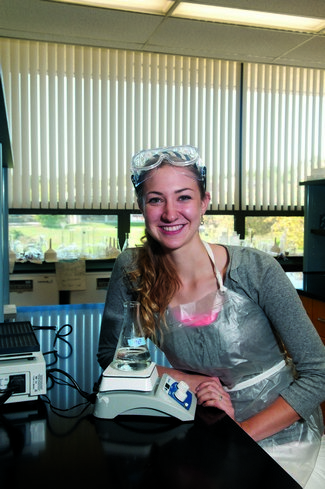 April Anamisis of Methuen credits Northern Essex with helping her find her career as well as her voice. A 2009 graduate of Salem High School (N.H.), April was prepared to attend a New Hampshire state school when she realized she had no idea what to major in.

“It was overwhelming to think about going off to college and paying thousands of dollars just to figure it all out,” says the 21 year-old. She turned to Northern Essex, but admits that without a focus she struggled academically. All that changed when she enrolled in Professor Marcy Yeager’s Environmental Issues class.

“I just fell in love with science,” she says. “I was so happy to find what I wanted to do.”

If she had any doubts, they were put to rest when she enrolled in chemistry with Professor Mike Cross.

With her new found motivation, April’s grades took a dramatic turn … for the better. Today she is enrolled in the Laboratory Science associate degree program carrying close to a 3.5 GPA. She is on track to graduate in May.
Self-supporting, April works two, sometimes three, jobs and relies on financial aid and scholarships to finance college. This year she received the Covanta Energy Corporation Scholarship.

“I went from being an unmotivated student to a driven lab science major because of Northern Essex,” April says.

Her major wasn’t her only discovery. Prompted by yet another professor, Susan Sanders, she auditioned for the college’s theater production and discovered she could sing. She invested in a few voice lessons and now sings the blues at local venues.

Northern Essex turned me around completely and helped me find my passions,” she says. “Everything I love I found here and it all feels really good.”