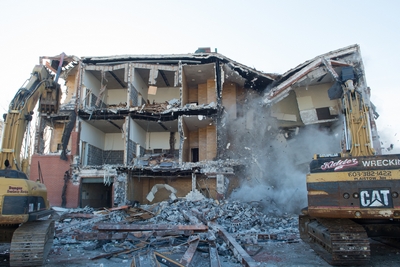 The former Lawrence Registry Building in the midst of demolition.

On Friday, Feb. 22, the old registry building in Lawrence—a 60-plus year old structure which has been vacant for the past 15 years—came tumbling down.

A wrecking company hired by the Northern Essex Community College Foundation demolished the three-story brick building in just 7 hours, creating space for what will become a green walkway connecting two of the college’s downtown buildings.

When completed, the green walkway will connect the college’s Dr. Ibrahim El Hefni Allied Health & Technology Center on Common Street—scheduled to open in the spring of 2014—and the Louise Haffner Education Center on Amesbury St.  The college has two additional buildings in Lawrence: the Dimitry Building on Franklin St. and the iHealth Building, also on Franklin St.

“When the green space is completed and our Allied Health & Technology Center opens, we will we will be closer to accomplishing the college’s goal of a complete urban campus in downtown Lawrence,” said Lane Glenn, president of Northern Essex.  “This will be a great advantage for the city, providing additional educational opportunities for local residents and a larger pool of workers for area employers.”

Built in 1950 as a courthouse, the building became the registry in the 1990’s.  It was purchased by the NECC Foundation from the Department of Capital Asset Management for $203,500 in 2011.

The 44,000 square foot facility will feature a Health Education Simulation Center, where health care students will receive hands-on experience in simulated environments such as a hospital intensive care unit, a trauma room, an acute care hospital room, an apartment, an ambulance, and a doctor’s office. The building will also include classrooms and computer labs and a Career Planning and Advising Center where students will receive academic and career counseling. 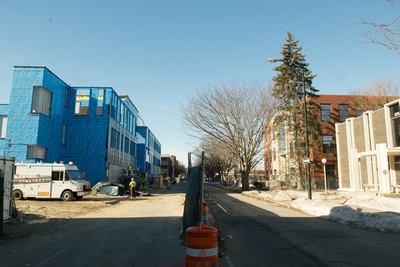 Common St. in Lawrence, El-Hefni Allied Health & Technology Center on the left and former Registry of Deeds on the right. 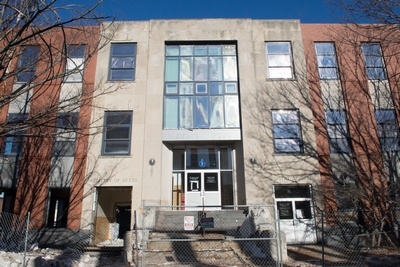