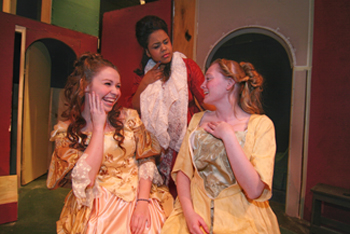 Alicia D'Olimpio of Merrimac, Lissangy Rodriguez of Bradford, and Samantha Wheatley of Lowell

Written by George Farquhar in 1707, “The Beaux Stratagem” was adapted by Thornton Wilder and eventually completed by Ken Ludwig. It tells the story of two young men who have spent their money enjoying the high life in London. Having nearly run out of funds Tom and Jack hit the road and take turns posing as a gentleman or his servant. Their plan (the stratagem of the title) is to find a wealthy heiress for one, who would then support the other. Along the way they find themselves in an inn peopled with highwaymen. Lady Bountiful, who lives near the inn, has a lovely daughter, and a daughter-in-law who is unhappily married to her drunken son. When a plan to rob Lady Bountiful is discovered, Tom and Jack try to thwart the rogues, with the help of the young women. 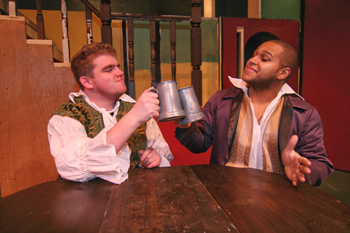 Conor Miller of Newburyport and Brian Cabrera of Lawrence

Wilder began the adaptation in 1939 but never finished; in the summer of 2004, Wilder’s estate asked Ludwig to complete the adaptation. The resulting play had its world première production in November 2006 at The Shakespeare Theatre Company of Washington, D.C.

Tickets for the production are $10 for general admission and $8 for students and senior citizens. They can be purchased at mvarts.info or at the door.

Susan Sanders, Coordinator of NECC Theater and Technical Director of the Top Notch Players at NECC is directing the play.

Madeleine Eames of West Newbury and Julia Crozier of Boston are interpreters in our Interpreting Program who will sign the play at the April 14th matinee at 3 p.m. This performance is open to the public. 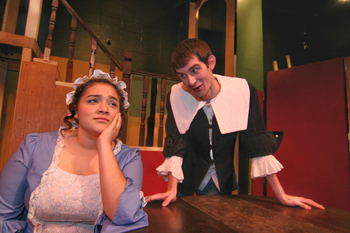 Kiara Pichardo of Lawrence and Matt Lewis of Tewksbury

Danvers
Thera May Driscoll in charge of Costumes 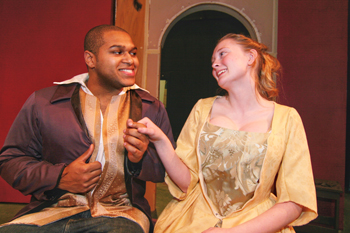 Brian Cabrera of Lawrence and Samantha Wheatley of Lowell 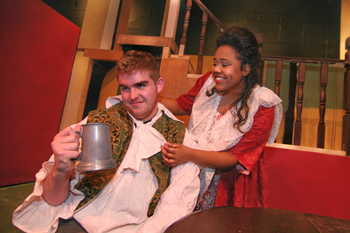 Connor Miller of Newburyport and Lissangy Rodriguez of Bradford