Third Career is the Charm for Nursing Grad 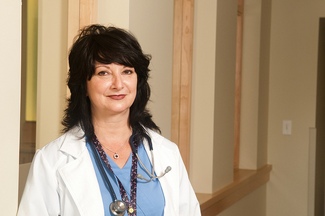 Patrice Peddle is on her third career, and she’s hoping to stay there.  Originally trained as a massage therapist, she graduated from Northern Essex in 2000 with a certificate in web page design & development. Her certificate quickly led to her second career as a web designer for Lycos, a search engine and web portal company.

When the company was bought out four years later, Patrice, along with 75* of the Lycos workforce, was laid-off.

Patrice loved her job at Lycos but she had never stopped thinking about becoming a nurse, a dream she had since she was young. Her job lay-off provided the perfect opportunity to pursue her longtime goal and she enrolled in Northern Essex once again, graduating with an associate degree in nursing and launching a new career in 2007.

“The biggest challenge in getting my nursing degree was believing in my abilities,” says Patrice. “Fortunately, my professors and instructors believed in me and supported me throughout the entire process.”

Patrice also credits Northern Essex support services such as PACE* and area hospitals which provide clinical sites for helping her to succeed. After graduating with her associate degree in nursing, Patrice started her career in the Intensive Care Unit at Lawrence General Hospital. She is now breast care coordinator in the hospital’s Breast Imaging Center where she supports patients throughout their treatment by providing emotional support and educational resources and assistance with scheduling.

“At Northern Essex, I received the attention and support necessary to excel academically, and that in turn led me to a very rewarding and fulfilling career in nursing.”