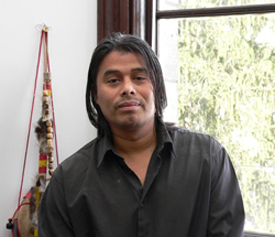 Cornell University associate professor and emerging Hispanic author Ernesto Quinonez, will read from his book “Bodega Dreams” and lead a discussion titled “What is Activism in Today’s World,” during the Friday, May 3, White Fund lecture presented in partnership with Northern Essex Community College at Lawrence High School, 70-72 North Parish Road, from 8:45 to 10 a.m.

Raised in Spanish Harlem, Quinonez is a product of the New York City public school system. Early on he was hailed by the Village Voice as a “writer on the verge.” His debut novel, “Bodega Dreams,” set in his home turf of Spanish Harlem, was chosen as a Barnes & Noble’s Discover Great New Writers, Borders’ Original Voices, the New York Public Library’s 25 Books to Remember, as well as the Los Angeles Times and New York Times Notable books of the year.

“Bodega Dreams,” has become a landmark in contemporary literature, it is required reading in many high schools and colleges around the country and it was heralded as a “New Immigrant Classic” by the New York Times.

Quinonez divides his time between Ithaca, NY, where he is an associate professor at Cornell University’s MFA program and New York City.

His essays have appeared in Esquire, The Sunday New York Times Magazine, The Sunday Times, and Newsweek. He has been a fellow at the Sundance Screenwriters Lab as well as other institutions.
He will read from “Bodega Dreams” and lead a discussion of what small actions individuals might be able to do in their everyday lives, in order to contribute to social causes and bring change.

For additional information on this lecture contact Martha Leavitt at mleavitt@necc.mass.edu
The White Fund’s purpose is to have a free series of interactive presentations for Lawrence area adults, youth, and children. The audience is encouraged to seek wisdom, cultural enrichment, and intellectual enhancement by attending and participating.

For additional information or to be notified of upcoming events in the White Fund Enlightenment Series, call 978-738-7403 or visit the website www.necc.mass.edu/whitefund