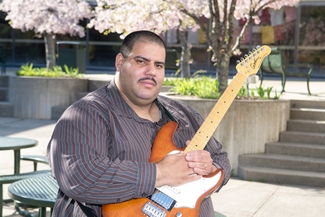 David De Jesús of Lawrence has been selected as the student speaker for Northern Essex Community College’s May 18 Commencement.

De Jesús, who worked full-time at a medical device company while pursuing his associate’s degree full-time, will graduate with high honors and an associate degree in General Studies: Music. He is a 1996 graduate of Greater Lawrence Regional Voc-Tech High School.

While at Northern Essex, De Jesús was a member of Phi Theta Kappa honor society; the Pathways to Academic and Career Excellence (PACE) Program, a federally funded student support program; and the Student Leadership Program. He also served as a supplemental instructor in Music Theory 2, leading weekly review sessions for students.

A talented guitarist, De Jesús performs frequently at Northern Essex, and is actively involved in his church community.

According to Kristen Arnold, his PACE Advisor, “I have seen him eager to share his experiences and advice with younger students. He is comfortable in a mentoring role and many of his fellow students have appreciated and benefitted from his guidance.”

De Jesús has been accepted to the Berklee College of Music in Boston and UMASS Lowell. A master’s degree in music is in his future, and his goal is to become a music teacher.

Upon learning he had been selected as commencement speaker, De Jesús said “It is truly an honor and a privilege to be selected at this year’s student commencement speaker. Although I have worked hard to be an exemplary student during my time at NECC, I would never have expected to be worthy of such an honor.”

De Jesús was nominated to be student speaker by his wife Anna De Jesús, Kristen Arnold of PACE, Karletty Medina of the Student Success Center, and his music theory instructor, Vasily Medved. A committee including faculty and members of the commencement committee reviews student speaker nominations and makes a recommendation to President Lane Glenn, who makes the final decision.

Close to 1500 graduates will receive certificates and associate degrees at the college’s 51st Annual Commencement, which will be held on Saturday, May 18 at 11 a.m. on Northern Essex’s Haverhill Campus.

Carmen Ortiz, the U.S. Attorney for the District of Massachusetts, will be the featured speaker.