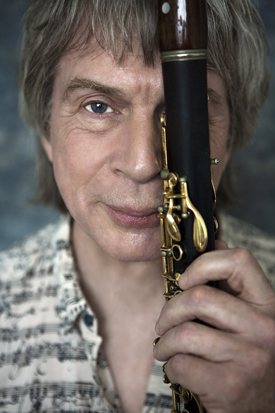 This event is open to the public. Tickets are $15 for general admission, $10 for seniors, and $5 for students. Admission is free for NECC students with a college ID.

“McKinley’s brilliant work was inspired by his visits to New York City for concerts of his music,” said flutist Michael Finegold, ECMP artistic director and an Andover resident. McKinley lives in Reading.

The program’s 10 movements have charming descriptive titles, such as “Flights of Fancy”, “All the Little Children Playing”, “Hot Nights of Dancing” and “The Speed of Light”, and an old favorite – “Sidewalks of New York”, is used throughout.

“His virtuosity, technique, imagination and communicative power have revolutionized the world of clarinet playing, opening up possibilities for the instrument that no one could have predicted,” Finegold said.
“Andrew Kohji Taylor is expanding an international reputation by captivating audiences with probing musical insight, luminous tone, expressive phrasing and technical mastery,” he added. Taylor lives in Brookline.

“Tom McKinley has dedicated “Streets of New York” to ECMP and the performers, who will include the excellent cellist Emmanuel Feldman,” Finegold said. Feldman is a Newton resident.

The program also includes “Duo for Flute and Clarinet” by Carl Vollrath, “Concerto a Tré for Clarinet, Violin, and Cello” by Ingolf Dahl, and the “Passacaglia” by Johan Halvorsen.

An audience question-answer period will follow with the composer and players.