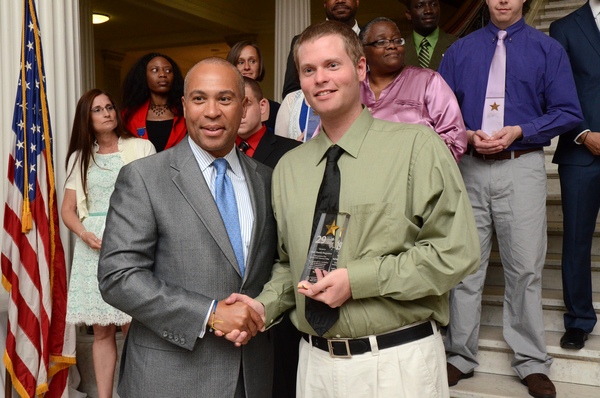 Mark Hargreaves of Methuen, a Computer Information Technology major who enrolled at Northern Essex after a job layoff, was honored as one of “29 Who Shine” during a student recognition ceremony at the State House in Boston on Thursday, May 2.

At the ceremony, he had the opportunity to meet Governor Deval Patrick along with his local legislators, Senator Kathleen O’Connor Ives and Representative Linda Dean Campbell.

He also publicly recognized Professor Russ Gouveia of the NECC computer science faculty as his mentor. “His knowledge and teaching style engages a class,” said Hargreaves. “I will always carry the lessons he passed on to me.” 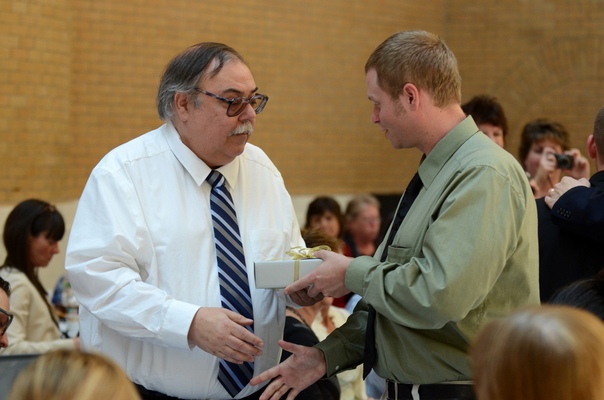 When he was laid off from his job with a forklift company two years ago, he decided it was time to pursue his dream of a college education and he enrolled at Northern Essex.

According to Professor Gouveia, who nominated him for the honor, Hargreaves was serious about his education from the start, excelling in the classroom and organizing student study groups.

He was soon recruited to serve as a supplemental instructor, leading study sessions for students enrolled in computer science courses, and as a computer science tutor. As Professor Gouveia writes “Everybody seeks out Mark because he’s so helpful.”

When the college created a college-wide information technology committee, Hargreaves was invited to serve as the student representative. He also volunteers to help college staff set up computer labs over summer and winter breaks.

Hargreaves is planning to transfer to Merrimack College or Southern New Hampshire University to pursue a bachelor’s degree in computer science part time while working full time. He just secured a job in desk top support with Worldcom in Pelham, NH.

Hargreaves watched his uncle build his own business from the ground up, and he would like to do the same. He envisions himself developing a networking business and even has a few patents for computer inventions that he would like to market.

In May 2011, the Massachusetts Department of Higher Education launched “29 Who Shine,” a program to recognize outstanding students representing each of our 29 public campuses. The honorees, chosen because of their academic achievements and record of student leadership and community service, stand poised to contribute greatly to the civic life and economic well-being of the state. Whether furthering their education or entering careers here in Massachusetts in fields as diverse as education, public policy, medicine, creative arts, and engineering, they truly embody the vibrant future that we all envision for the Commonwealth.