Employees Honored for Work at NECC 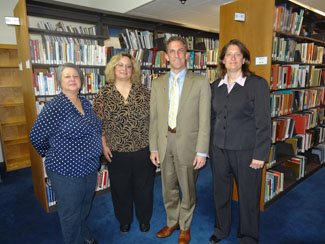 Butler, an administrative assistant in the NECC division of Law, Education, and Social Professions, was nominated by her colleagues.

“She is known by all faculty in Law, Education, and Social Professions as the go to person in the Division to get things done,” wrote Chuck Phair in his nomination. “Trish is one of the hardest workers at NECC and I’m sure each and every faculty member in the Division would agree. Trish is a person who is under everyone’s radar and doesn’t understand how much she does for others and how much we all appreciate her hard work.”

Butler has worked at NECC for 14 years. She holds a Bachelor of Arts in Psychology from Merrimack College.

MacAvoy was nominated by Ernie Greenslade, director of NECC’s public relations, who praised her for developing a successful athletic program and consistently bring home national honors. The baseball team was ranked third in the nation last year and our students also ranked nationally in track.

“While winning is always something to celebrate, Sue’s priority is providing student athletes—many of whom have not been successful in the past— with the support services and structure to succeed academically,” wrote Greenslade. “Last spring 10 members of the baseball team and one member of the track team transferred successfully to four-year colleges and universities. She is always open to new opportunities to promote her program and its athletes.”

MacAvoy holds a Bachelor of Science degree in Physical Activity Specialist from Marywood University and a Master of Education in Sports Management from East Stroudsburg University.

Pancorbo has worked as Northern Essex for 20 years. She works on the Lawrence campus in Enrollment Services.

A graduate of Northern Essex, she was nominated by coworker Ana Valdez who praised her for being a “model performer”. She was lauded for being dedicated as well as a quick thinker.