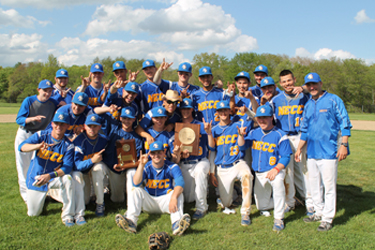 The Knights are now NJCAA Region XXI Champions and Massachusetts community college champions!
Sunday was a great day for Trevor Bouvier, of Salem, NH, who carried the NECC Knights to a 17-2 victory over Holyoke at Massasoit. Bouvier racked up seven RBIs on three hits, two for home runs.

The lead stayed with the NECC Knights after the first, when Jonathan DelaCruz of Haverhill started the game with a double, stole third, and scored on a sacrifice fly by Alex Ray of Essex. The Knights increased their lead with five runs in the second when Bouvier started the inning with one of those blasts, scoring Chris Martin of Manchester, NH, Jacob Rayner of Billerica, and Christopher Andella of Tewksbury.

Northern Essex Community College Knights continued to score runs until the end of the game. The Knights scored seven runs in the seventh on an RBI single by Chris Martin of Manchester, NH, a three-run home run by Bouvier, a two-run double by Tyler Johnson of Newton, NH, and an RBI single by David Cusack of Newburyport to finish off the win.

Martin who was 3-3 from the plate with 2 runs scored also brought his A game to the mound against Holyoke. Holyoke managed just two hits off Martin, who allowed no earned runs, walked two, and struck out three during his eight innings of work.

This will be the third time NECC has been represented at the World Series. The Knights baseball teams from 2006 and 2012 also played in Texas.