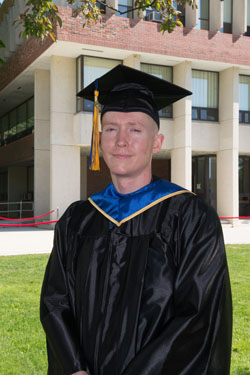 When Trevor Bannerman takes over as Chief Electronics Technician at the U.S. Coast Guard’s Long Beach/Los Angeles, CA, electronics shop later this summer, he will be well equipped with new electronic technology skills he acquired at Northern Essex Community College.

Bannerman, a First Class Petty Officer in the U.S. Coast Guard graduated from NECC with high honors in May with an Associate of Science Degree in Electronic Technology: Computer Systems Option as well as a Certificate in Electronic Equipment Technology.

Under an elite program for U.S. Coast Guard enlisted personnel, titled the Advanced Computers and Engineering Technology (ACET) Program, Bannerman was allowed to attend college full time for two years to achieve a degree in a technology or engineering discipline.

Long Beach, CA is a long way from White Lake, MI, where Bannerman was born and raised and as a young boy thought he might study law and the science of politics. When he became a dad in his last year of high school, higher education dreams were placed on hold. Instead, like so many other young men in the nation’s automotive capital, he secured a job in an auto shop. Laid off in 2001, with a wife and two young children to support, Bannerman joined the U.S.Coast Guard.

While an aptitude test revealed he had strengths in all areas, he elected to study the fundamentals of electronics technology. He found he was not only good at it, but liked it as well.

Over the next several years, his resume with the Coast Guard grew as did his family. By the time his third child arrived, a two-year commitment in Hawaii ended and the man who longed for a return to a climate of four seasons transferred to Boston. He arrived in Boston as a single father of three. Within a few years, Bannerman and his young family settled into Coast Guard housing in Wakefield and he met a certain high school English teacher who would become his wife.

By 2008, the Bannerman family was on the move again when he was transferred to Atlantic City, NJ. He earned a degree from the local community college, but was eager to continue his studies. Surprisingly, studying law and politics no longer interested him. Electronics did. So when he learned of the ACET program, he applied. Northern Essex was the only school he found that offered an electronics-only associate degree program. He was selected for the program and the Bannermans returned to Wakefield.

For the last two years he has commuted almost daily to the Haverhill campus where he was immersed in classes like digital logic and circuit analysis.

“I found I really liked the math component of all these classes,” says the 35-year-old Bannerman. “I liked figuring out the puzzles the math problems presented.”

Bannerman likes math so much his next academic pursuit will probably be a bachelor’s degree in mathematics. He praises professors Paul Chanley also of Wakefield and Manny Caranci for their individual teaching styles.

“I’ve had a really positive experience at Northern Essex,” he says. “I’m glad I enrolled here. It has that small campus feel. I had some anxiety about returning to school. I hadn’t been in a classroom in 16 years, but I found everything I needed here. ”

His advice for others thinking of enrolling at NECC: “Do it, but be prepared to be challenged,” he says. “All the professors push you to do your best.”