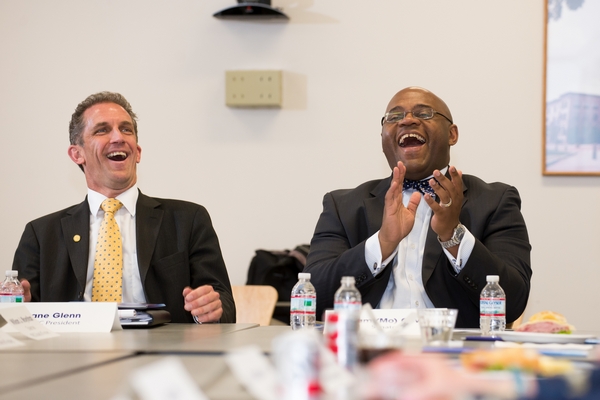 Senator William (Mo) Cowan visited Northern Essex Community College’s Lawrence Campus on Tuesday, May 28, to learn how the college is partnering with local employers to prepare students for careers.

The Senator heard from NECC President Lane Glenn, college administrators, a local employer, and three students who are enrolled in or have recently graduated from high- demand programs. State Representatives Diana DiZoglio and Marcos Devers were also in attendance as well as members of the college’s board of trustees.

Emily Ramirez of Lawrence, a 2010 graduate of Lawrence High School and the newly elected student representative to the Northern Essex Board of Trustees, is studying Engineering Science at Northern Essex. She started at a larger university but found the big lecture courses were not a good fit for her, and she shared how much she appreciates Northern Essex’s accessible faculty.

Omar Anagam, also of Lawrence, graduated from Northern Essex’s Respiratory Care program this spring. The father of three enrolled in the program after being laid off two years ago. After taking his boards in June, he will immediately start looking for a fulltime job in his field. Omar commented on the “amazing lab equipment” including the sophisticated mannequins that are used in clinical instruction.

Lindsey Curole of Merrimac graduated from the Lab Science program this year and is now attending UMass Lowell and working as a lab technician for Charm Sciences, a Lawrence company that manufactures food safety, water quality and environmental diagnostic tests.

One of Curole’s supervisors, David Legg, Vice President of Quality Assurance at Charm Sciences, also attended the meeting, shared how the college worked with his company to develop an associate degree in lab science, one of the few applied science degrees offered in Massachusetts.

“At Charm Sciences, we employ over 100 life science employees with a bachelor’s degree or higher but we’ve recently created a technician position that’s well suited for associate degree graduates,” he said. “Lindsey started last summer as an intern and is now employed by us.”

Following the meeting, President Glenn took Senator Cowan on a neighborhood tour, sharing plans for what he calls a complete urban campus in the city.

Stops on the tour included already existing college buildings such as the Dimitry Building on Franklin St.; the Louise Haffner Fournier Education Center on Amesbury St; and iHealth—an innovative public/private partnership designed to prepare adults for careers in health care—on Franklin St. President Glenn also pointed out three new projects: the El Hefni Allied Health & Technology Center on Common St., which will open this fall; 420 Common St., another public/private partnership which will feature a community bookstore and café as well as college classrooms; and the site of the former Registry of Deeds on Common St., which will become a green space with parking.

“Enrollments are surging in Lawrence; and we are expanding our campus to address the need in the city,” said Lane Glenn. “This is all due to partnerships, partnerships with private funders and with local employers. They appreciate what we’re doing and they’re investing in us.”

Calling community colleges “engines for economic development,” Senator Cowan said “You should be proud of the work you are doing…you are educating students for transfer as well as immediate entry in the workforce.”

Senator Cowan was appointed to the United States Senate in February to fill the vacancy created by the resignation of John F.
Kerry, who is currently Secretary of State. 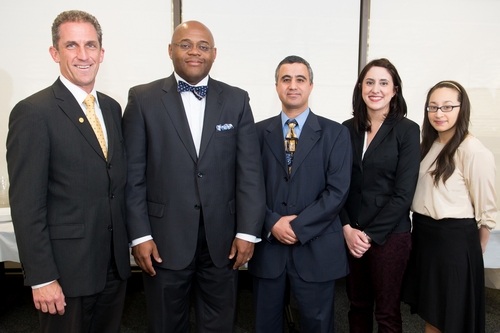 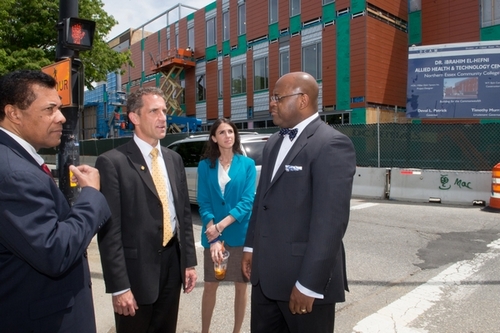