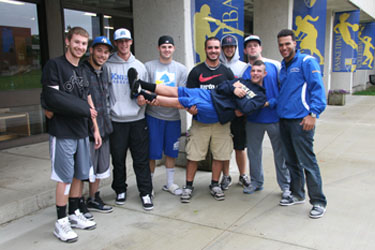 When the NECC Knights baseball team clinched the regional tournament in May, the first thing sophomore Derek Dolan said was “We have to call Peanut.”

“Peanut” is the young man who the team met May of last year when they traveled to Tyler, TX for the NJCAA Division III World Series and volunteered at a free little league baseball clinic. The mutual admiration between the team and the then 13-year-old was immediate. Long after the team returned home, teammates stayed in touch with Peanut making sure he was doing well in school and on the diamond.

So, when the Knights learned they were headed for Tyler, TX again this year, the first person they contacted was Peanut. Once in Texas, the Knights sophomores introduced the freshman players to Peanut and once again the mutual admiration club was formed. He attended every game and sat in the dugout as the unofficial team mascot.

When the team and Peanut said their goodbyes, promises were made to keep in touch and visit when they could. This week that promise was kept when Peanut, who turned 15 in early June, and his mom Kativa Robinson flew to Boston for a week of sightseeing and Knights seeing.

Already the two have visited with team members, attended a Red Sox game at Fenway Park, visited Maine and New Hampshire and are hoping to take in the city’s historical sites.

“Meeting these team members has been life changing for him,” said his mom. These young kids really look up to the older guys. You don’t know what it has done for him. If everyone treated each other the way they do the world would be a different place.”

Residents of Gilmer, TX with a population of 5,000, the Robinsons were pleasantly surprised by the size of the NECC Haverhill campus when they visited for an impromptu pizza party in their honor. Peanut, who saved $300 umpiring Little League games back home in Texas, spent a good deal of his earnings on NECC items purchased at the college bookstore.

Peanut had his own surprise for the team members. The Robinsons had the hat Peanut wears on his junior varsity high school team replicated and they gave each Knight an orange and black Gilmer Buckeyes baseball hat.

“You’ll have a lot of good boys here,” said his mother. “They have been good for him and he has been good for them…for some he is the little brother they never had.”