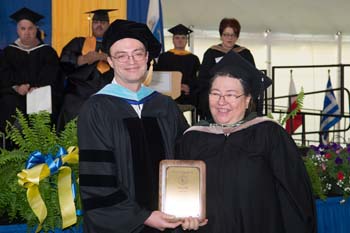 Sabin, who continues to teach computers science at NECC on a part-time basis, began working at the college as a work-study student in 1970. She worked in many departments throughout the college before retiring in 2010. Sabin spent her entire career as a Northern Essex Community College employee. During that time she has helped thousands of students secure funding to make attending college possible. Sabin had a special affinity for working with veterans.

“Over the years Nancy served as a role model for students and other staff, continuing her own education part time while working full time,” said NECC President Lane Glenn before bestowing her with the title of Assistant Dean, Emerita of Enrollment Services.

Herself a graduate of Northern Essex, Sabin went on to earn a bachelor’s in computer information systems from New Hampshire College and a Master of Business Administration degree from Plymouth State College.

At Northern Essex, the rank of emeritus is an honor that recognizes sustained excellence in performance, character, and meritorious service to the college. Emeritus status is given to a retired college employee based on recommendations by the college’s emeritus committee and approved by President Glenn.