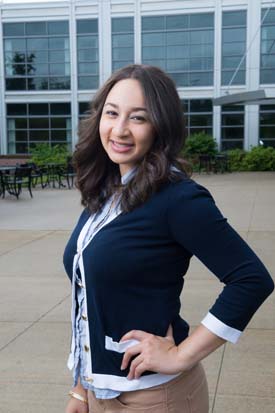 Emily Ramirez of Lawrence has been elected the student representative to the NECC Board of Trustees.

A 2010 graduate of Lawrence High School, she is majoring in engineering science and also working on certificates in help desk and electronic equipment technology.

Ramirez, who works 30 hours a week at Best Buy as a member of its Geek Squad, is interested in transferring to a four-year institution to study electrical or computer engineering after graduating from Northern Essex. This year she hopes to start an engineering club at the college.

With a longstanding interest in science, she would like to eventually become a teacher.

Ramirez is the president of the NECC Student Senate, but her term will expire when she joins the trustees July 1.

“Being a part of NECC’s Student Senate helped shaped me,” Ramirez said. “I learned a lot about myself and met so many people. I’m looking forward to continuing my involvement with the college as a member of the board of trustees.”

The NECC Board of Trustees includes nine members who are appointed by the governor of the state to a maximum of two five-year terms as well as an alumni-elected member, who also serves a maximum of ten years, and a student trustee who serves for two semesters.