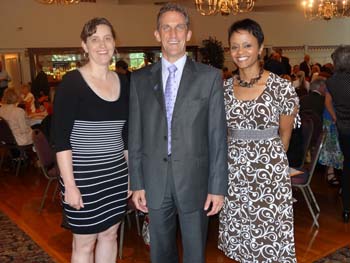 Dr. Noemi Custodia-Lora of Haverhill, an assistant dean of foundational studies, liberal arts & Sciences at Northern Essex Community College, and Isabelle Gagne of Holliston, associate professor of psychology at NECC, were two of 12 women to be honored at the YWCA Haverhill’s Academy of Women, 24th Annual Tribute to Women.

The YWCA Academy of Women was established to create a permanent tribute to the achievements and significant contributions of women who live or work in the Greater Haverhill area. Members of the academy have become role models by setting high standards, blazing new trails and working to overcome obstacles.

The event was held June 11 at DiBurro’s function facility in Bradford. Haverhill native Matt Noyes, the primetime weeknight meteorologist for NECN was the keynote speaker. During his presentation he noted that while studying at Cornell University he struggled with calculus. He turned to Northern Essex where he enrolled in a summer course and learned to grasp the concepts.

Custodia-Lora was nominated by NECC President Lane Glenn who praised her saying, “During the time I have known Dr. Custodia-Lora I have been consistently impressed by her broad understanding and vision for the college enterprise which has always extended outside the boundaries of her department and discipline; by her prolific and high quality work; and by her ability to collaborate effectively with all manner of people and personalities both on- and off-campus. Her role as the key architect in the creation of NECC’s Applied Science degree in Lab Science perhaps best exemplifies these qualities. She is an academic leader, a model citizen, and most certainly a significant role model for future generations of women in the field of science.”

Before joining NECC she was a post-doctoral fellow at Tufts Medical School in Boston. She holds a bachelor’s in biology from the Universidad de Puerto Rico and a PhD in physiology-endocrinology from Boston University.

Gagne, an associate professor of psychology at NECC since 2007, was nominated by fellow NECC faculty member Cynthia Crivaro. Gagne was born and raised in Montreal, Canada, and moved to the United States as a young adult. She has received numerous teaching awards including the Massachusetts Colleges Online Teaching Award.

“Isabelle is a compassionate, encouraging teacher who cares deeply about her students and their successes,” wrote Crivaro. “Additionally, over the past two years, after being diagnosed during pregnancy with breast cancer, she battled extensive treatment head-on and has been a source of encouragement and inspiration for her students and peers for her strength and courage as well as her unwavering commitment to her three young children, her marriage and her career.”

She serves as the NECC faculty advisor to the gay/straight alliance. In addition, she regularly involves her students in community service and learning activities. She faced one of her greatest personal challenges when two years ago at eight months pregnant she was diagnosed with breast cancer.